Arijit Bhattacharyya is a cultural practitioner interested in art as a medium of social engagement. He is interested in investigating the politics of participation in the production of culture. Most of his works revolve around the migrating farming communities from West India (Specifically from Gujarat, Rajasthan and Maharashtra) and their presence in the urban India. Arijit was a part of Global Youth Cultural forum in Jeju Island South Korea organised by UNITAR. Earlier he was a part of Jaipur Art Summit (2017), Photo Kathmandu Mixed Media Residency (2016), Later the atelier ate her (2016) Kochi Biennale’s Students biennale section, Khoj Peers Residency (2016) and various other projects and exhibitions in India and abroad. He is an alumni of Painting Department Faculty of Fine Arts M.S. University Baroda (M.V.A. 2018) and Surat School of Fine Arts (B.F.A. 2016).

Born in Jharkhand, Giridih, India, Arjun Das left home when he was just 11, for employment due to financial pressures. He came to Kolkata in 2005 and joined a restaurant for part time work as a cook and continued his schooling in parallel. Arjun completed his graduation and post graduation from Rabindra Bharati University, Kolkata in visual art and sculpture  in 2015 (BFA) and 2017 (MFA) respectively. Drawing from his own life experiences, he work brings into focus the experience of rural-urban migration and the way in which  livelihood and lifestyle of people get produced within such transformation. Currently, he practices art in Kolkata.

Ayesha Zulfiqar is an artist and educator. She has completed her M.F.A. from Chelsea College of Arts London and graduated from National College of Arts Lahore in 2008. Zulfiqar has been selected for several national and international artist residency programs. She has exhibited her works in one-person and group exhibitions since 2009 to date. Zulfiqar lives and works in Lahore, Pakistan.

Kathyayini Dash is an installation artist and musician. She studied visual art first at the Faculty of Fine arts, Maharaja Sayaji Rao University, Baroda and later at Ambedkar University Delhi and has been training in Hindustani classical music. Her practice involves constructing multi-sensory compositions in an effort to merge the two broad genres of performance and visual art. Drawing from multiple sources - news material, Facebook posts, personal/public images and experiences, music, art history and literature, she seeks to fashion improbable combinations that are immersive and contemplative. She is currently interested in the process of performance, making that engages her body and voice in a staged visual field.

Kavan Balasuriya completed his B.A. in Fine Art from Central Saint Martins College of Art & Design, University of the Arts London, in 2014. He has been working and exhibiting in Sri Lanka since. Kavan defines himself primarily as a draughtsman and painter, although he has dabbled in audio-visual media and with painting-as-sculpture. In the last two years he also worked as a designer, applying silkscreen prints and pen-and-ink drawings to a variety of household items. He is interested in shared cultural heritage across India, Myanmar and Sri Lanka, specifically probing connections between identity, conflict and spiritual displacement through the lens of colour and religious symbolism. Notable showcases include Border Movement’s Sub_Sequence / AV Showcase (2018), Colombo Art Biennale’s Conceiving Space (2016), Cinnamon Colomboscope’s Testing Grounds: Digital Arts and Cultures Across South Asia and Europe (2016) and Shadow Scenes (2015).

Minzayar Oo is an award-winning Burmese photojournalist and a documentary photographer based in Yangon. He left the medical studies in 2012 to pursue his interests in documenting the transition of his country. He worked with Reuters news agency from 2012 until 2016 when he became freelance and became a member of the UK-based photo agency Panos Pictures. Minzayar works with international publications such as The New York Times and has exhibited in galleries and photo festivals around the world. He has won a Martin Adler Prize at the Rory Peck Awards in London, among other international photojournalism awards. His photo-reportage includes issues surrounding Myanmar’s rarely-accessed, billion-dollar jade mining industry in conflict-torn Kachin State and the Rohingya crisis in Rakhine State.

Moe Satt lives and works as an artist and curator in Yangon, Myanmar. In 2008, he founded and organized Beyond Pressure, an international festival of performance art in Myanmar. He has participated in live arts festivals throughout Asia and Europe. In his works, which span various mediums from photography, sculpture; to video and sound installations, Moe Satt addresses provocative social and politic issues in military-ruled Myanmar, such as the role of religion and that of the individual in society. He has been invited to several artist-in-residence programs, among others, ACC in New York (2017); IASPIS in Umeå, Sweden (2016); and International Residence at Recollets, Paris (2015). His work has been featured in several group exhibitions, including Political Acts: Pioneers of performance art in Southeast Asia in Melbourne (2017); CAFAM Biennale, Beijing (2013); and Busan Biennale (2012). He was a finalist for the Hugo Boss Asia Art Award 2015.

Mustafa Khanbhai holds a BFA from the Faculty of Fine Arts, MSU Baroda and an MA in Visual Art from Ambedkar University Delhi. His practice centers around new ecologies that have begun reabsorb and reclaim the disaster zones of the Anthropocene. His series Critter Cities involves projections of animated organisms that thrive in our otherwise hostile human cities.

Pooja Pant is a filmmaker, women’s rights activist, multimedia workshop facilitator, video journalist, photographer and media artist. She founded Voices of Women Media in Amsterdam in 2007 and recently founded Final Take Films in Kathmandu. Currently she is based in Nepal.

Bikkil Sthapit is a photographer, creative designer, videographer & a oral historian. Coming from a background of radio journalism Bikkil has worked for 8 years as a Radio Jockey after which he developed his storytelling style. Developing as a photographer and designer for the past 8 years he then decided to work with visual media and picked up the video camera. Bikkil's storytelling skills translate into a visual medium and is constantly looking for interesting ways of telling a visual story.

Partha Sengupta is a Calcutta based documentary photographer. He is an alumnus of Dhaka based photography institute Counter Foto. He is Post Graduated in Finance and did MBA and worked in reputed private sector bank and financial institutions. But the temperament did not go well to work in corporate sector ultimately in mid of 2012 he took photography as his medium of his expression. His main interests to work on human rights issues and represents the people whose voice need a visual support. He had his exhibition at Dhaka, Delhi, Calcutta, Cologne, Montreal and Ahmedabad. Currently he is doing a long term project for the four years on the border conflict issue in his home state Bengal.

Seema Nusrat is a visual artist based in Karachi, Pakistan. Having obtained a BFA from the Indus Valley School of Art and Architecture in 2002, she went on to pursue a Masters in Fine and Media Arts from Nova Scotia College of Art & Design in Halifax, Canada. Seema’s work transpires from the energy found in the urban metropolis and her sculptures, drawings and collages indicate her capacity to understand the most unusual materials which are in cooperated in her oeuvre. Seema has exhibited her work within Pakistan and internationally, establishing herself as a young contemporary artist with the added experience of teaching since 2010 at the Indus Valley School of Art and Architecture.

Shivangi has done her specialization in MA Printmaking from Royal College of Art, London in 2016. Prior to this, she did MFA (2012 – 14) in Fine Arts from Wimbledon College of Art, UAL, London & graduated with BFA from College of Art, Delhi University in 2012. For her recent project, she Interviewed survivors of acid attack throughout the world and responded to their stories by using acid to etch their portraits into zinc plates. With these prints, her aim was to raise awareness about domestic abuses & violence that these women faced. Her work has been widely exhibited Internationally including E/AB Art Fair NY, Art Rooms International Contemporary Art Fair London, New/Prints Winter Exhibition at International Print Centre New York, Fragmented Identities, Mead Museum, Massachusetts. She was the 2018 receipt of the Financial Grant from Lalit kala Academy, India, 'Artist Development Residency Award', IPCNY 2018, Finalist of Print Making Scholarship at Manhattan Graphic Prints Centre 2018, 'Anthony Dawson Young Printmaker Award ' 2017, 'Jerwood Drawing Prize' 2014, & 'Long List Signature Art Prize' 2015. Her works are also part of a permanent collection at British Museum, Victoria & Albert Museum and Mead Museum, U.S.A.

Shristi is an artist based in Kathmandu. She has worked for Kathmandu Trienniale and the past two editions of Photo Kathmandu and is currently teaching visual arts at a high school. Her paintings explore our relationship with the past, particularly the sentimentality we hold for certain places, people, and events of the past. She received her BA in Studio Art from Mount Holyoke College, MA in 2015.

Soma Surovi Jannat is an Artist from Bangladesh, who tries to create a bridge between different aspects in the surrounding through her visual language and reform them with an optimistic approach. Her experience and understanding regarding nature, the way different communities live, their thoughts; all act as inspiration, resource, and medium of her works. Interaction, collaboration or social engagements are the main aspects of her working process. She works with Drawing, Painting and Installation. She did her Master of Fine Arts (MFA), Department of Painting from Visva Bharati, Santiniketan, India in 2016 ; and Bachelor of Fine Arts (BFA), Department of Drawing & Painting from Faculty of Fine Art, Dhaka University, Bangladesh in 2013.

Suntharam Anojan completed his B.F.A. (special in painting) degree from Ramanathan Acadamy of fine Arts of university of Jaffna, Srilanka in 2016. He has been working parallely exhibiting in Sri Lanka. His practice mostly based on abstraction and its connection between natures. He seeks to find his own way of expression by connecting his personal history and trauma in the painting. Currently, he is working with the Jaffna craft instution.

Saran Raj graduated with BFA(sculpture) from Government College of Fine Arts in Chennai in 2017. Although an academically trained sculptor, his artworks aren't just sculptures. He doesn’t create artworks with the medium in mind, rather the subject or the intent of the work. The artwork finds its own medium in his art making process. He is focusing more to re-establish the of the conceptions of our art/conventional art from my ancestors through his artworks and creation.

Shikh Sabbir was born in Kushtia in Bangladesh and studied fine Arts at the faculty of Fine Arts in Baroda. He pursued his masters at the Academy of Arts (KHiO) at Oslo, Norway. Alam draws his thoughts in free hand painting. His paintings explore childlike imagination in colour, line and form evoking a sensory experience that is gentle and powerful at the same time. Currently he lives and works in Norway.

Vipin Vijay is an award winning contemporary film director and screenwriter from India. A post graduate in film making from the Satyajit Ray Film and Television Institute (SRFTI), Calcutta, he received the Charles Wallace Arts Award for research at the British Film Institute, London in 2003. Vipin is the recipient of "The Sanskriti Award" (2007) for social & cultural achievement. His works are made under independent codes and defy any categorisation eluding all traditional genre definitions and merge experimental film, documentary, essay, fiction all into one. 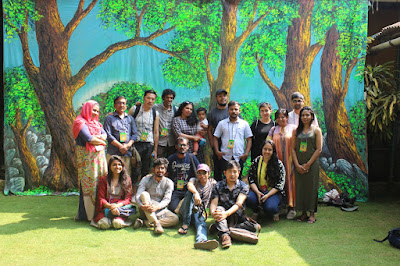